Staying in an albergue with two hoteliers and three pilgrims leads to a more friendly experience with a lot of chatting. 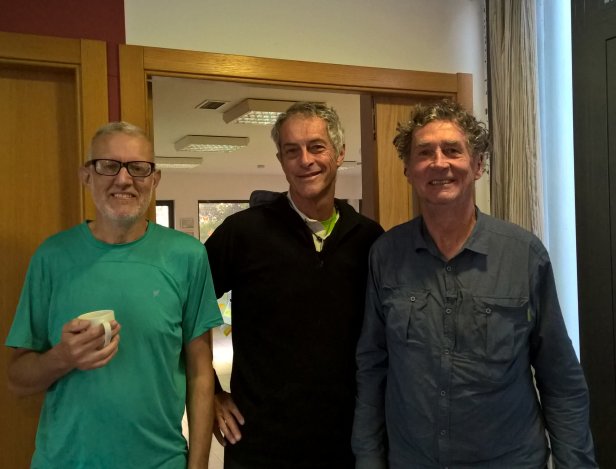 James comes from Northern Ireland and Eamon from my home town of Brisbane.Here’s the breakfast room with the usual morning fog outside. 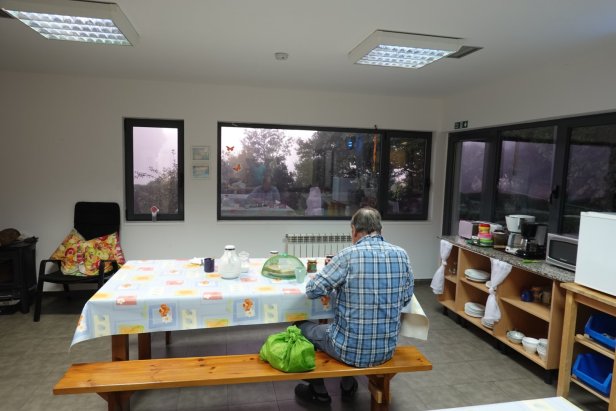 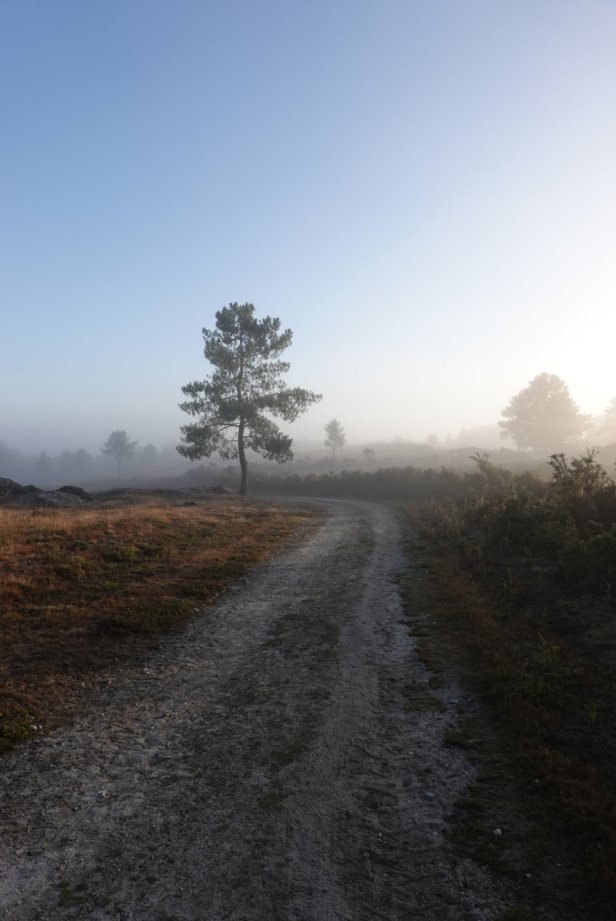 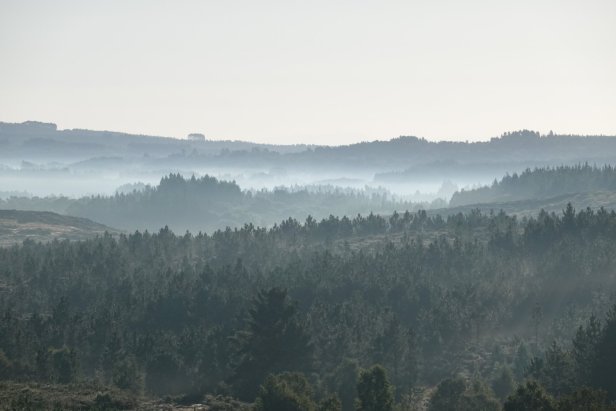 I walked for a while with Bert but we lost track of each other after he stopped for you know what. 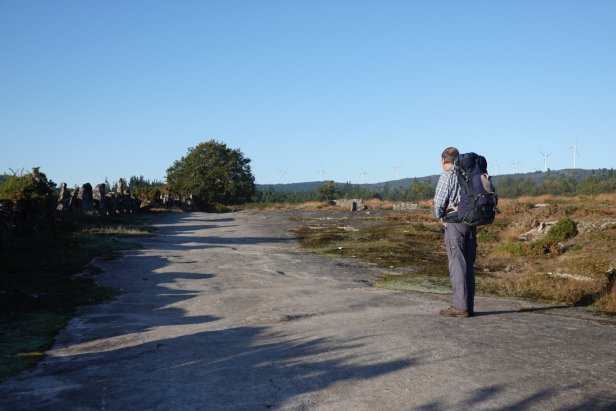 Here are more of those stone walls. 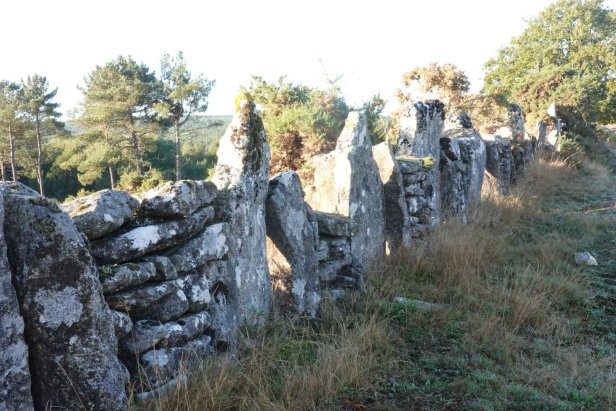 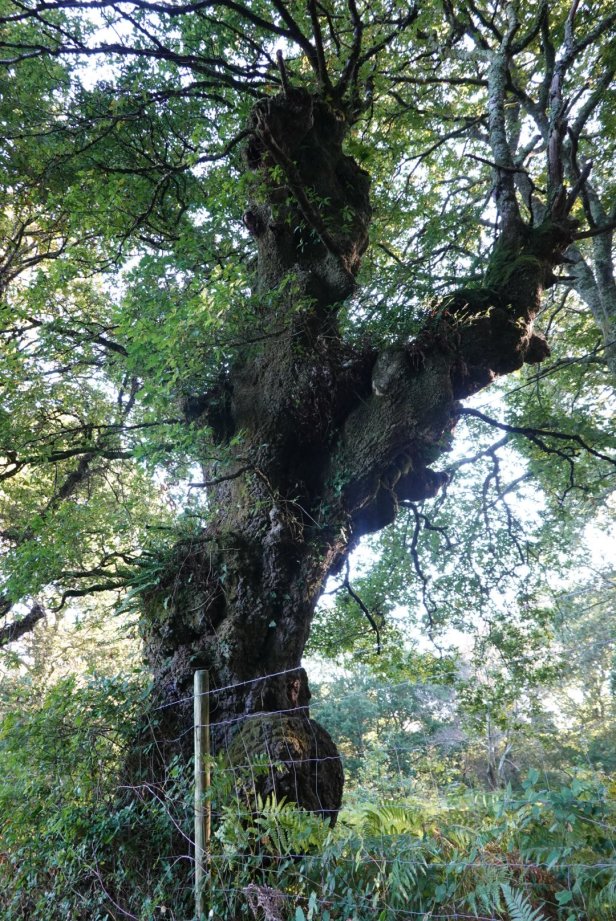 There were a very few small farming hamlets along the way with the usual horrios. 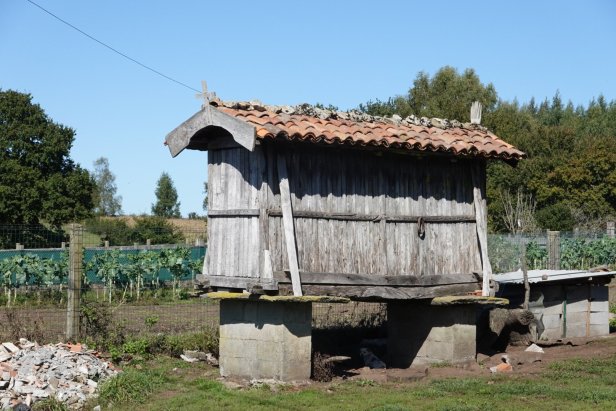 One location which my guidebook showed as having a bar didn’t and I was despairing of finding somewhere to get lunch until I came across this farmhouse in the middle of nowhere. 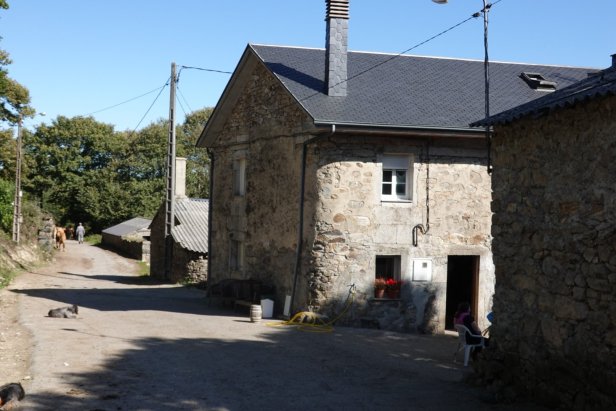 The enterprising people running the family farm have set up a little cafeteria. 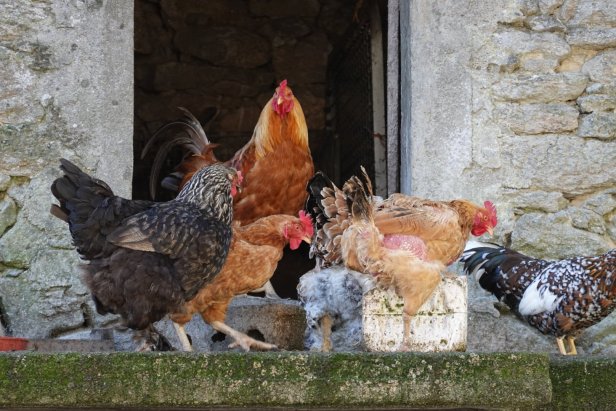 When I asked about getting a stamp, the woman running it started to explain why they didn’t have one but in the local Gallego language.Hearing it so clearly, it reminded me a lot of Brazilian Portuguese. I think she said that too many people would come in only after a stamp and not buy anything. I think she’s right. Here’s her dad who helps in the cafeteria as well as looking after the cows. 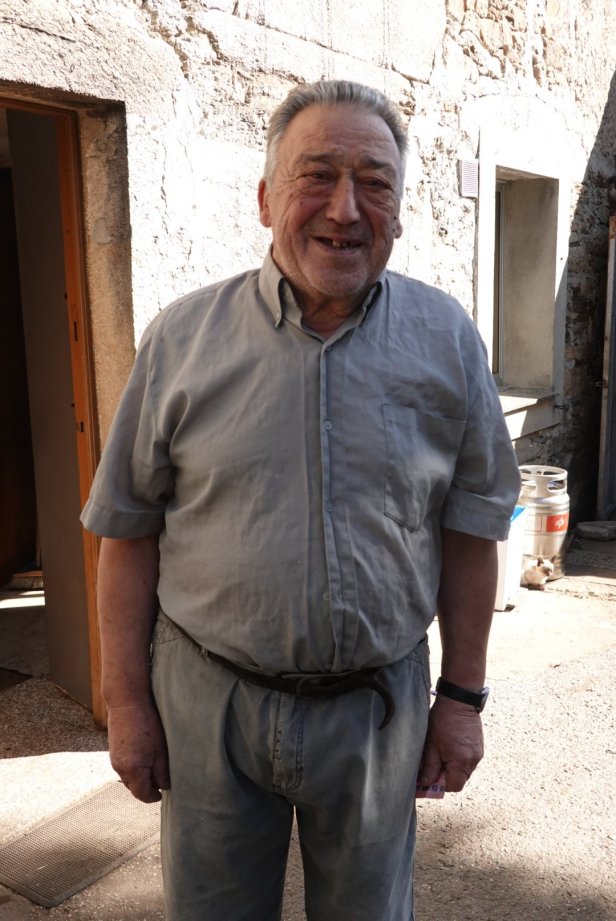 This mushroom looked like something out of a kid’s storybook. 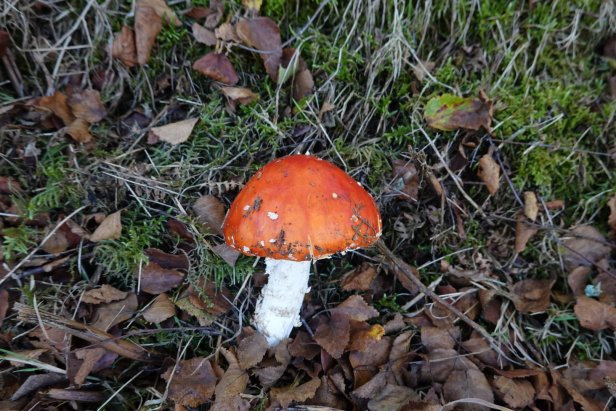 On the outskirts of the town of Sobrino is this lake built by tbe Cistercian monks in tbe 15th century to irrigate their crops. 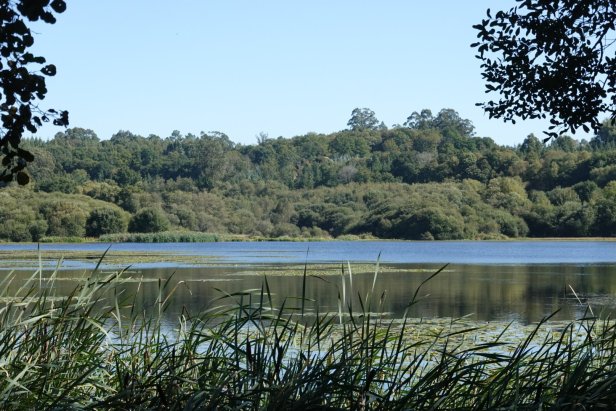 Tonight I’m staying at the albergue in the monastery. 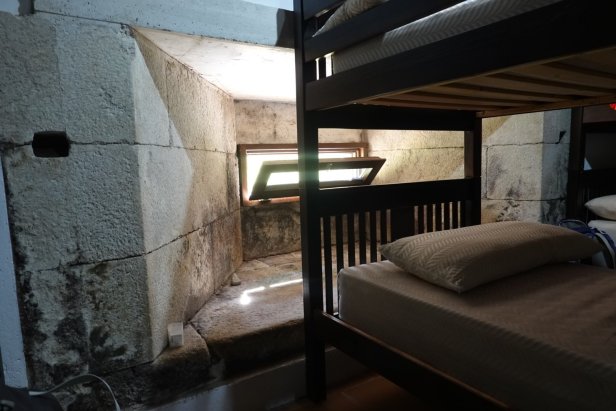 I’ve run into many others I’ve met over previous weeks. Jorge, who I haven’t seen for about 4 days, ended up in the next bed and above me is a german girl who was in tbe bunk above me o e night last week! And there,’s at least 6 others I know

The main church is currently being restored but pilgrims can wander around part of the abbey. 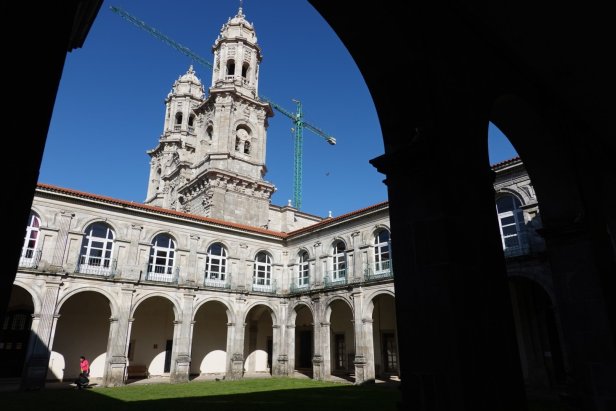 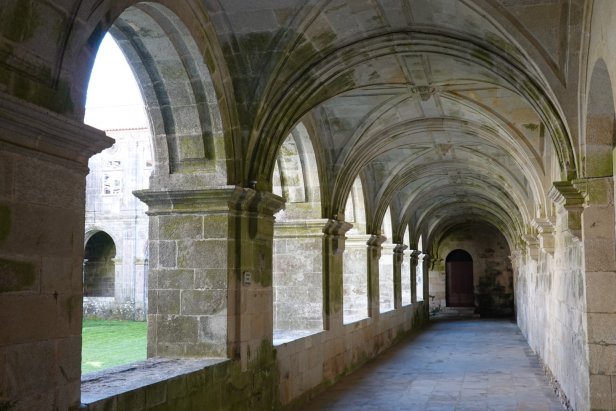 This is the 13th century kitchen. 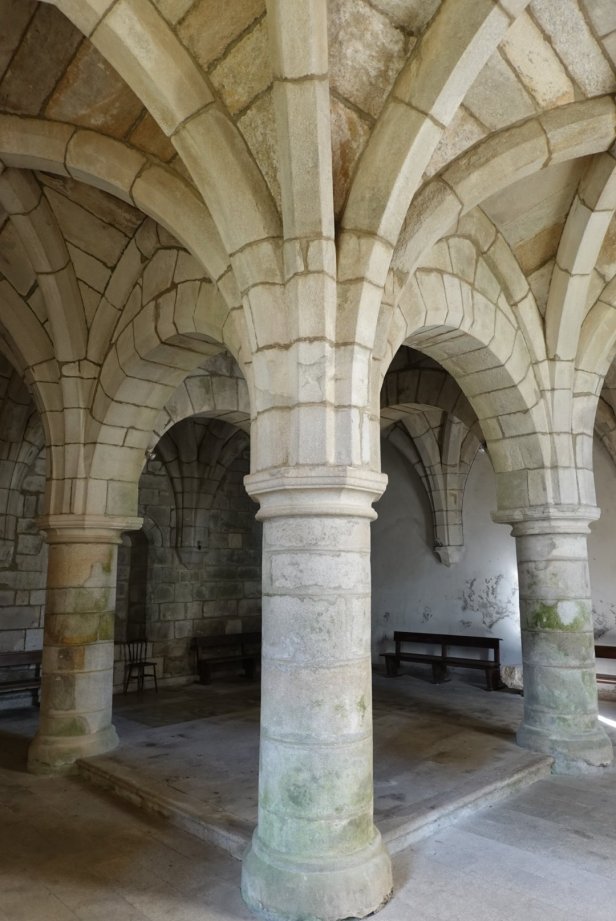 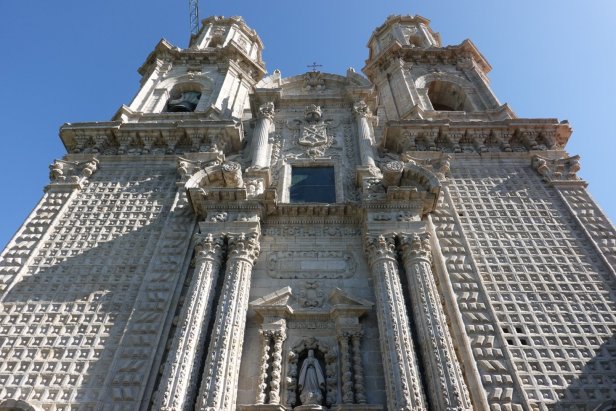 This is what the church looked like before tbe start of restoration. The monastery was abandoned for many years but was re-established in the 1950s. 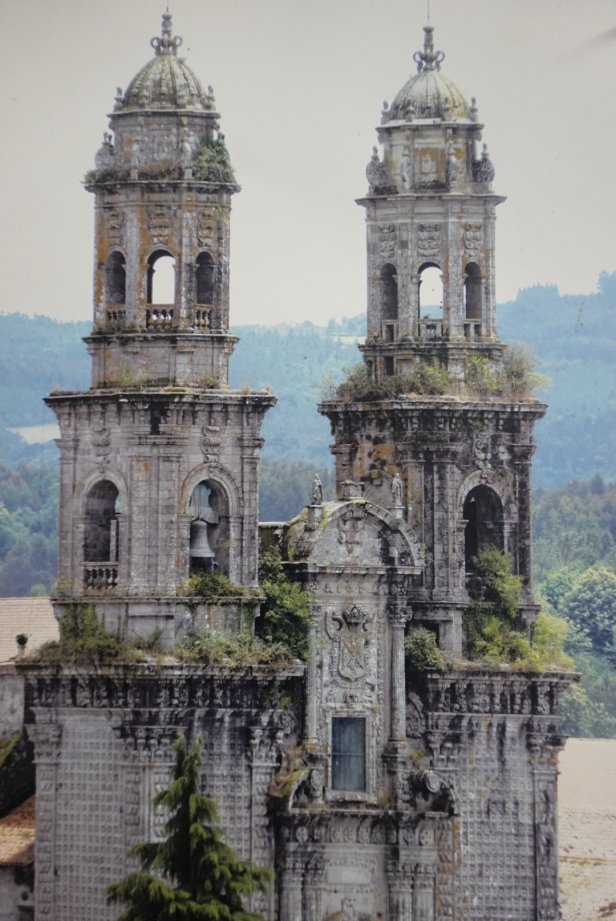 After a nice fish dinner, it was time to look at tomorrow’s walk. 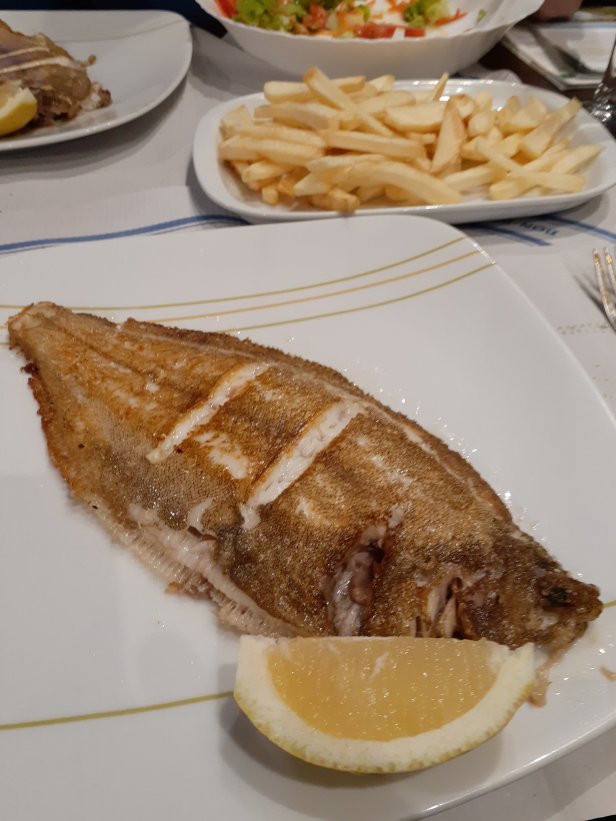 I’m preparing myself for some culture shock as late tomorrow and on Sunday I’ll be walking along the Camino Francés or the French Way. Due to various movies and books this is the most popular route to Santiago by far.

Last year, some 186,187 pilgrims collected their “Compostella ‘ or completion certificate after walking along this route. My current walk along tbe Camino del Norte was completed by 19,000 and the previous walk in Spain that I completed along the Via de la Plata just 9,000. And in Italy my walks were completed by even fewer pilgrims.

I’ll report on this tomorrow !