The Menu del Día or set menu has varied little over the last month. For the main course, it’s a choice of pork , beef or  chicken fillet , sometimes fish or fried calamari but always, always  with chips, like it or not. Last night it was the same meat choice but with salad! Well iceberg lettuce and tomato anyway . At my table st the bar for dinner was an Italian, a Spaniard and Case from the Netherlands . After a while I started mixing up my Spanish and Italian but we understood each other.

This morning I farewelled my friend Antonio from Bilbao, with whom I’d walked for 2 days . He’s heading north to Astorga.

Basically I turned left onto the lower route to Santiago through Ourense while Toni is heading up to the top route. 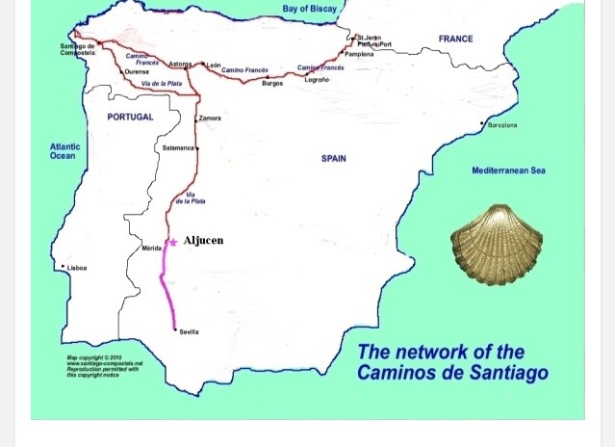 We had a lot of fun together even if I didn’t always understand what he was  saying .

Walking west now , my shadow at sunrise is ahead of me. The trees caught the early morning light then the sun dissapeared behind thick clouds. 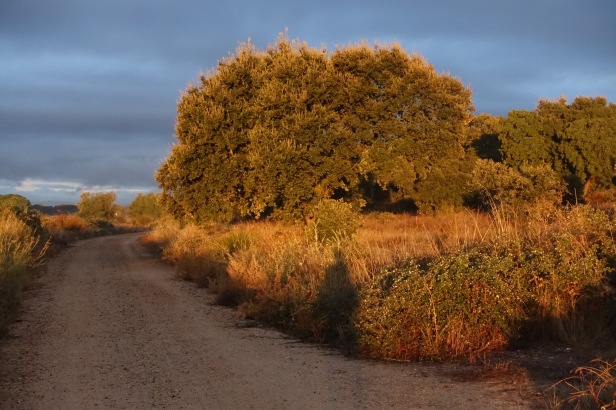 I think these sheep might have been waiting to be milked- there’s a lot of sheep milk cheese made around here.

The path was well signposted, but in my usual absent minded manner I walked right past a clear sign saying turn right. I ran out of signs down on the banks of the River Esla. Using my GPS to get back on track I ended up heading the wrong way , scrambling up steep rock faces. The data is very inaccurate, connecting points kilometres apart which ignores features like rivers. Then my tiny brain remembered that I had loaded up different files for the Via Sanabrés, which is what I started today. I loaded that and eventually found my way back to where I’d made the error although on the wrong side of a barbed wire fence that I had to gingerly pass through.

I did get some nice photos of the river though.

I think the platforms are for either duck shooters or fishermen. I think this sign basically says ducks and anyone walking through beware!

Having wasted about an hour walking an extra 5 km, I eventually got back on track and came across two Dutch guys I  hadn’t seen for weeks.

Eventually I got to the bridge over the river.

Tbe path from there allowed some spectacular views of the river.

The sky started to clear and the country opened up again in broad fields. 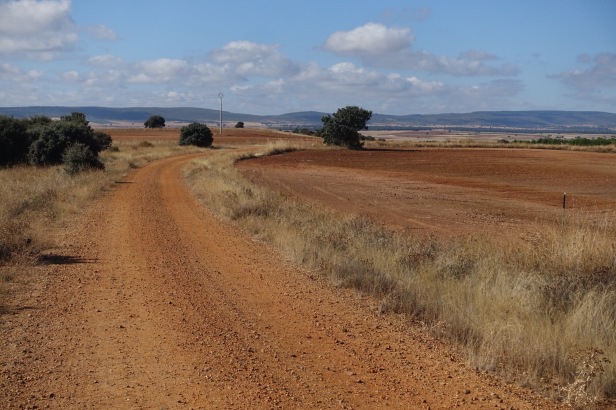 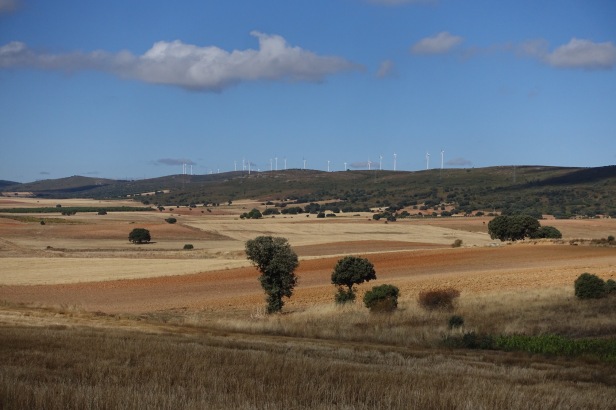 Two types of renewable energy in one photo!

Eventually I arrived at my destination having walked 31 km instead if the planned 25 km.

The albergue here is a very traditional one and we’ll be having a communal dinner tonight.