I walked the Via Romea Germanica (VRG) from Innsbruck to Rome in April/May of 2018. This is the third long walk I’ve completed in Europe. The first was a section of the Via Francigena in 2015 and then I walked the Via de la Plata in Spain in 2016 (see a previous post  Walking in Spain and Italy  for a summary)

This is the view looking back at Innsbruck from the VRG.

The modern VRG, based on a description of an ancient pilgrimage route from the 13th century, was initiated only a few years ago. I’ll describe in this post some of the differences to more established routes that are a result of its newness.

The variety in landscapes over the length of this walk is one of its great attractions.

For the first two weeks or so I walked mainly either up and down the sides of valleys avoiding the busy valley floor, or along bicycle tracks.

There was a lot of climbing but this meant I also had beautiful views to enjoy.

Vineyards stretch up the slopes as well as across the valley floor.

After a 500m climb to cross the Cimirlo Pass from Trento, the VRG takes you down the beautiful Valsugana, again a mix of hilly walking and flat bicycle path.

The guide book says that I climbed around 7,300 metres over the first 250km of the walk, from Innsbruck to Borgo Valsugana, which took me 10 days.

You’ll follow the Brenta River as it steadily grows in size passing pretty towns such as Valstagna .

The VRG squeezes through the narrowest point of the Valsugana

and then crosses the flat plain of northern Italy. Over the next 400km or so, the walk is incredibly flat with only about 30m of climbing on average a day.

The VRG passes the Comacchio marshes where you’ll be walking for a while below sea level. You can see from the photo below that the lagoon on the left is lower than the Reno River flowing to the Adriatic Sea within its levee banks, on the right.

Finally, after the town of Forlì, the VRG leaves the plains behind as it begins to climb steadily and crosses the Apennines via the Serra Pass, at around 1,100 m above sea level. 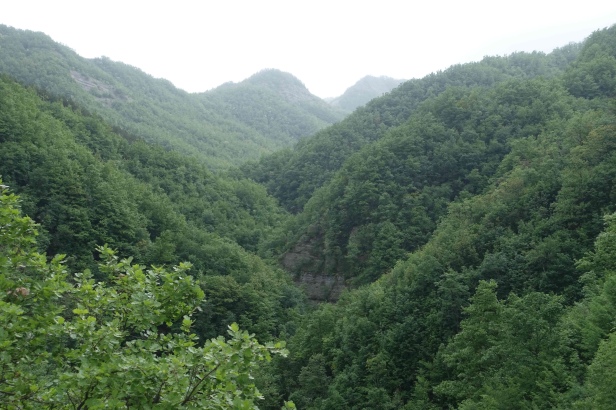 The VRG then traverses the rolling landscapes of Tuscany, 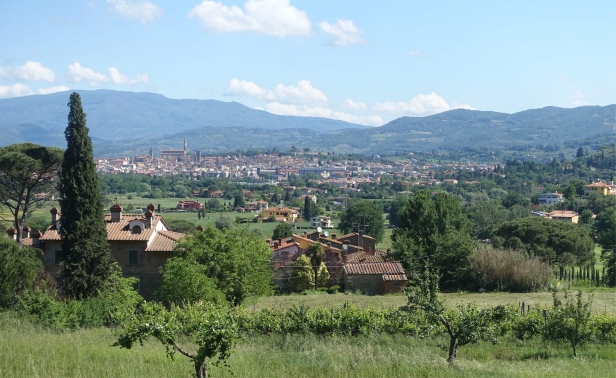 on its way to Rome.

Walking on ancient roads is always a moving experience for me. On the VRG, these include this section of the Roman Via Claudia Augusta near Trento, 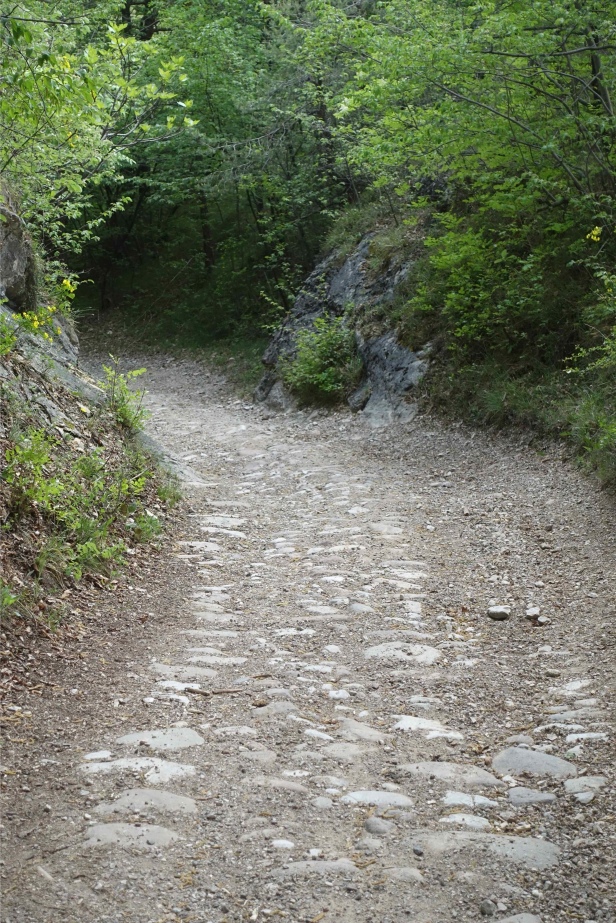 sections of the medieval road across the Serra Pass, used by pilgrims, muleteers and other travellers over many centuries 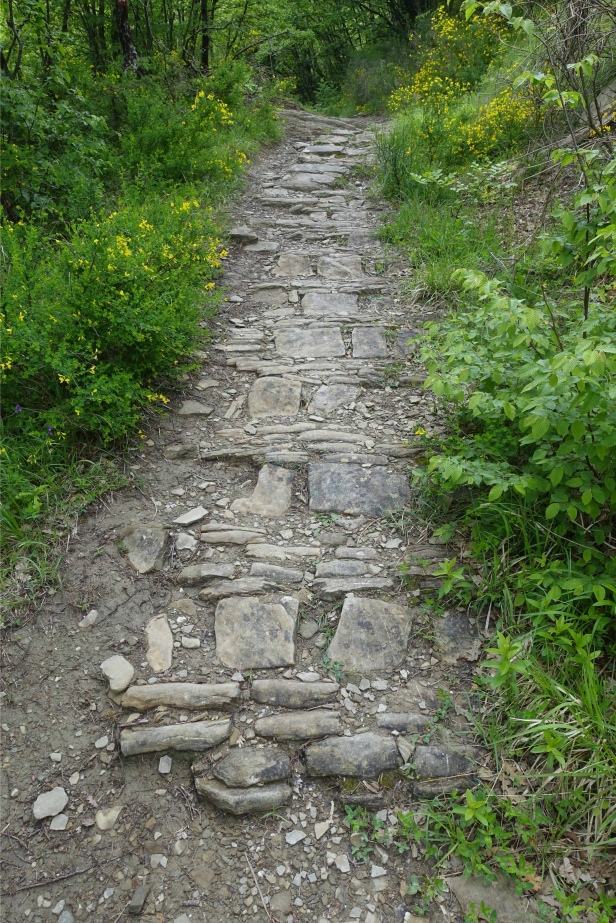 and the almost 2,000 year old surface of the Via Cassia, just south of Montefiascone.

There was a mixture of trails and pathways, 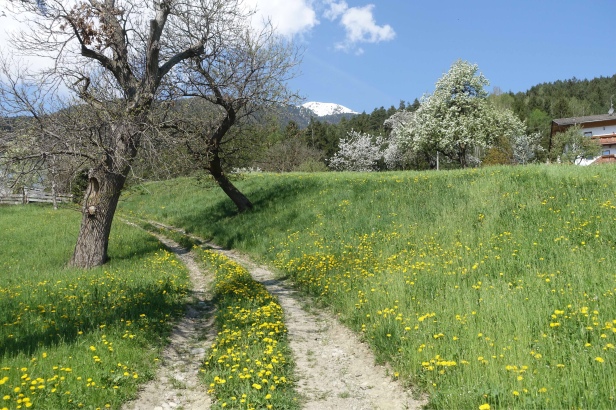 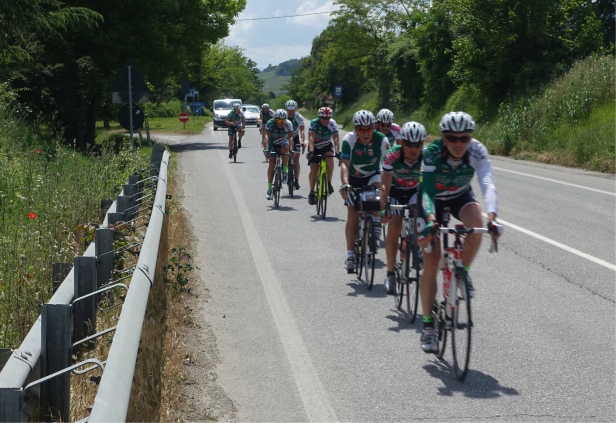 As is always the case on walks through Italy, there were sections with busy traffic that can be a bit scary.

I walked in April and May. April 2018 was warmer than usual and I only encountered a little bit of snow at the Brenner Pass (1,370m). 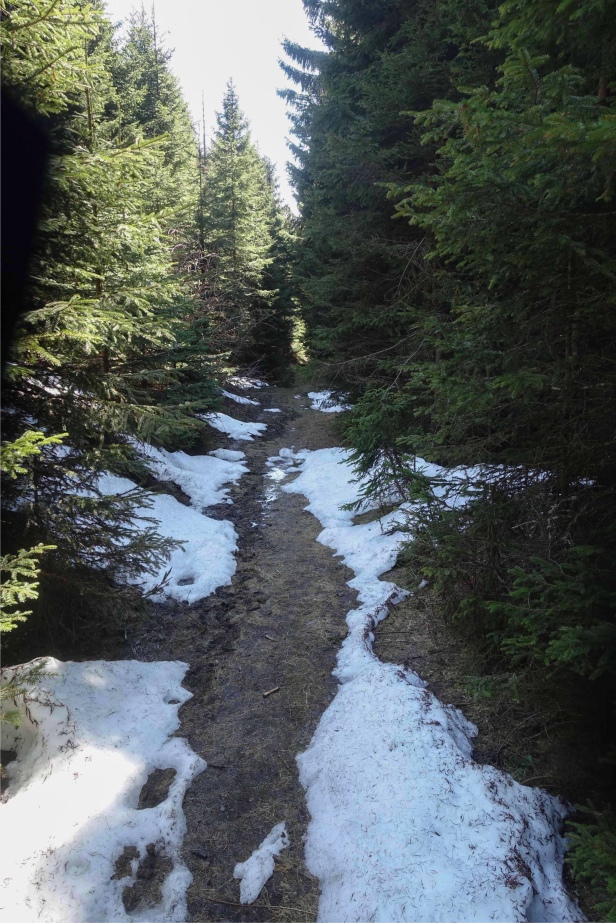 I’d imagine that the high parts of the route could be difficult in winter.

Spring can be quite wet but I was very lucky as in the whole 6 weeks I was only caught out in heavy rain once. It did rain quite a bit some evenings and I encountered a lot of mud along the way.

Most of these sections of road were easy to negotiate although my boots and occasionally my trousers got a bit muddy.

In a few places, such as that in the photo below, the track was impassable for a hundred meters or so and I had to find a way around it.

This sometimes can be a bit uncomfortable due to plants with thorns that scratch and leaves that can make you quite itchy, but it’s all part of the adventure.

I carried two litres of water as it was quite hot and I sweat a lot. I often had to top up along the way. On most days I came across at least one village fountain, often with beautiful pure cold mountain water . 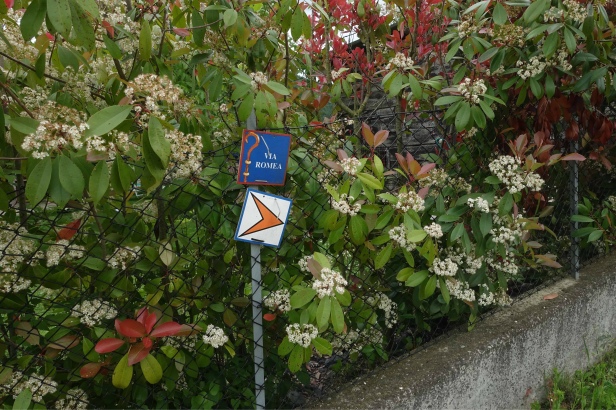 However, you sometimes have to keep an eye out to spot the little stickers .

At times, it would have been nice to have more signs, especially at crucial decision points. 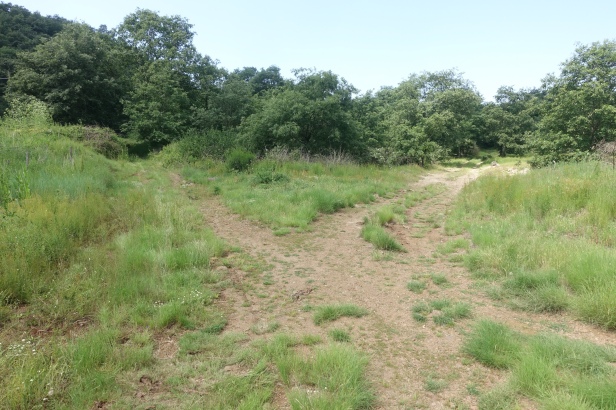 In some places, it would be very difficult to place signage, for example where the path cuts across cultivated fields.

Descriptions of the Italian section of the route appear in the Italian language guide book and in both Italian and English descriptions on the VRG website. There’s also an update section on this website and downloadable GPS data.

As it would have been a bit cumbersome and confusing to use all of these, I settled on using the guide book as I read Italian and also as the book has good summary maps. I also used the GPS data and printed out the two pages of updates. For me the GPS was indispensable, as walking alone with my mind wandering off in all directions, I easily miss seeing signage.

On a few occasions, the website descriptions had been updated due to changes in viability of certain sections but the changes weren’t in the GPS data or in the update section. On one day I was pushing through 2 metre high grass with water higher than boot level and vines wrapping around my ankles on a section due to this issue.

This photo was taken looking straight ahead, and I’m 6 foot 2 inches tall. 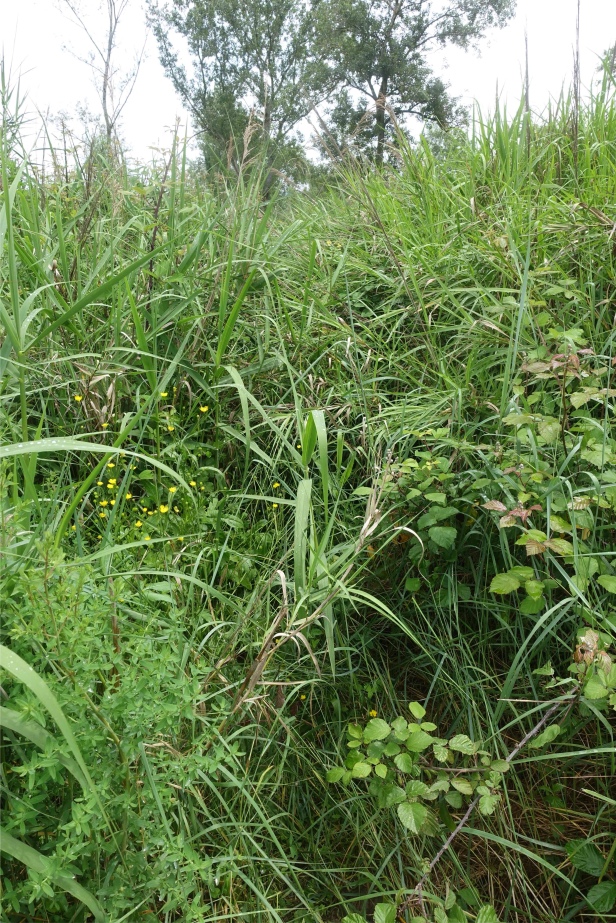 I’m sure with time the route will stabilise and these issues will be far less prevelant. Also local members of the VRG Association put in a lot of effort maintaining parts of the route prone to heavy vegetation growth, fallen trees and so on.

During the 6 weeks of my walk, I didn’t meet one other pilgrim walking the VRG. It’s possible that there were others, but the paucity of pilgrim hostels meant that there were few opportunities to meet others in the evenings as usually happens on more established pilgrimage routes. I did walk on two occasions with members of the VRG Association who very kindly joined me. 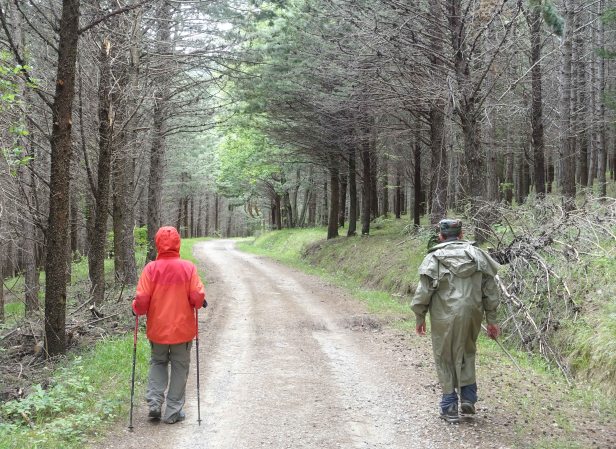 As a solo walker, the cost of accommodation was quite high as a single use room usually costs only slightly less than a double. In the few pilgrim hostels I encountered, I typically paid €15. However in hotels, B&Bs and affittacamere places, the cost for a single use room was between €30 and €60 a night. The VRG Association does has arrangements with quite a few accommodation providers giving discounts to members, which I often took advantage of. 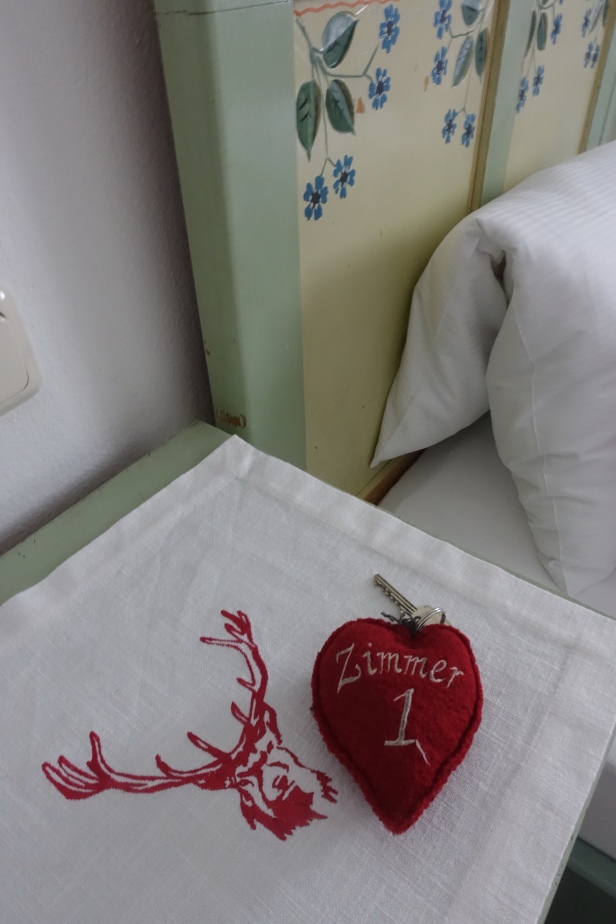 I found that a lot of places either didn’t respond at all to emails or responded only after many days, so it was best to phone them. This requires of course a European SIM for your phone and often some knowledge of Italian. Even phoning was occasionally difficult requiring several calls before someone answered.

Another option is to use an app such as booking.com which is quick and easy but then you miss out on the pilgrim discounts. I ended up doing this quite often due to a shortage of time. I would say that arranging accommodation for 40 consecutive nights was the main hassle I had on this walk. It’s very different to Spain where you can just turn up every day and find a bed in an albergue.

I was booking quite a few days ahead and on some occasions found places with no vacancies. I think booking ahead would be absolutely essential in summer.

I must also mention a subject dear to my heart, food. Whilst I loved walking in Spain, the food along the Via de la Plata was often quite basic and I think I probably ate patatas fritas just about every night for 6 weeks.

In Italy it’s pretty hard not to eat well and for me this was an important part of the overall experience. Here are a few examples.

Maltagliati with fresh beans and wild fennel in Bagnoregio 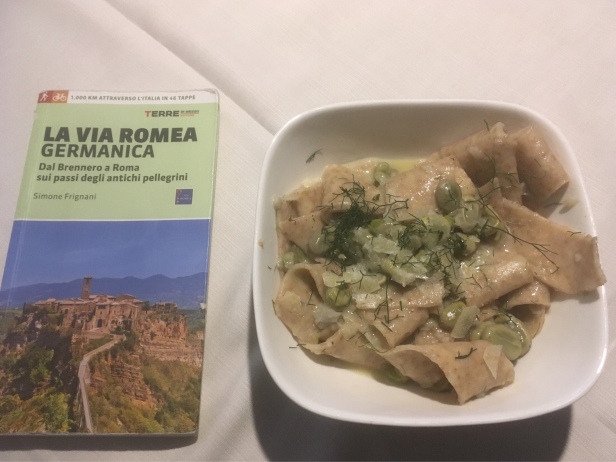 In summary, this an extremely interesting walk, traversing widely varying landscapes and passing by many interesting towns, as I described in another post, Art and Architecture Along the Via Romea Germanica.

At this point in time (2018) you won’t get the typical pilgrim experience of traditional hostels, meeting others walking the route and pilgrim menus as you find in Spain or along the Via Francigena.

However you well get an in-depth experience of Northern and Central Italy and the opportunity to meet lots of people along the way. Many will be curious about what you are doing, as the number of pilgrims passing by is still very low.

The most pleasant memories I have of this walk however are those of the wonderful friendliness and hospitality of members of the VRG Association who I met, making this a very special experience indeed.

6 thoughts on “Walking the Via Romea Germanica”