Today I met up with Jean- Michel from France again and we headed off up very steep trails across several rows of hills, We climbed over 600 metres and descended almost 1200m which was tiring as the paths were so steep .Also there was a lot of loose rock and I almost fell several times after sliding downhill. 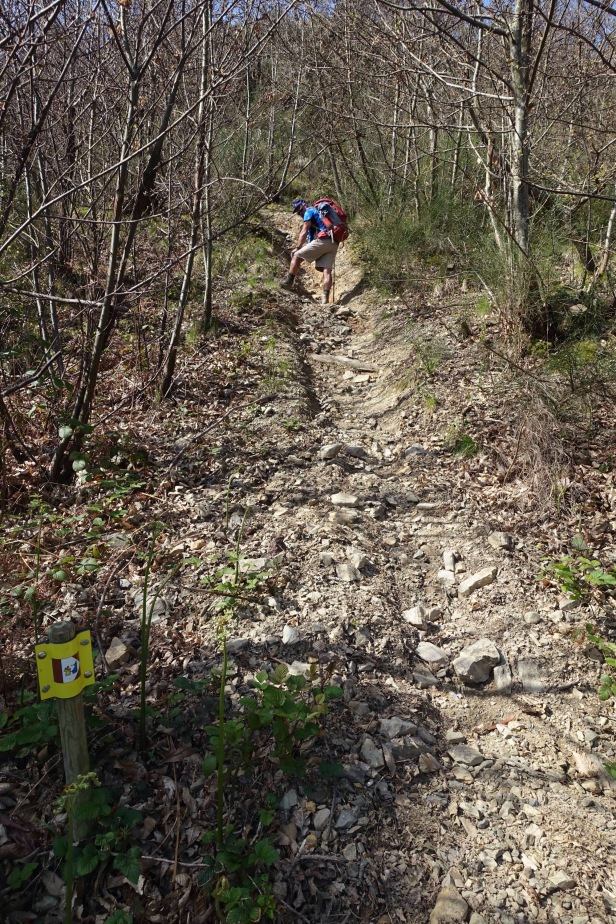 We passed several very picturesque villages, One tiny one took 20 minutes to get through because every time we emerged, a man working in a field told us we were in the wrong path . He even came up and drew a street crossing in the dirt ‘incrocio, incrocio a la destra’ go right at the crossing . Another one – Pozzano Superiore – was like the garden of Eden – bubbling steams , olive groves , vegie patches and green everywhere. Our path wound through all this.

After yesterday’s blisters I tried the highly recommended double sock technique to no avail as I now have even bigger ones . Off to the chemist for blister pads ! Speaking of chemists, I read that Italy has more pharmacists than any other European country but the lowest availability of pharmacists ! When I told them what I wanted they asked where I had the blisters as they have different sized patches . When I said ‘ everywhere ‘. everyone in the shop laughed. Off to bed now, I hope the washing dries and we find somewhere to stay tomorrow night !

6 thoughts on “Aulla to Avenza”