Today was another public holiday – the second in the two weeks that I’ve been walking. The people at the hostel pointed me in the direction of a supermarket that they thought would be open, but it wasn’t .

This added some 3 extra kilometres to my day’s walk and along with taking a wrong turn, I ended up doing about 38 km.

I did have one muesli bar to eat though . The bar of chocolate that I’d been carrying had suffered from the heat and turned into dust in a pocket of my back pack. It will be interesting when I eventually open the umbrella I carry in that pocket.

It was comforting though to see that the locals were also doing it tough with all the shops shut.

The walk took me out of town along the top of a levy bank and then continued the whole way through forest and rocky areas along the river.

The walk was quite flat today and I won’t see hills again for about 10 days until I start climbing the Appenines.

Every few kilometres I passed yet another group of picnickers. 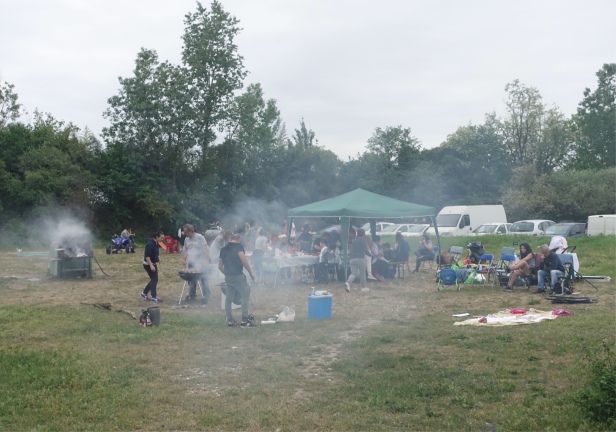 Half way through the day I came across a bar and they made me a panino for my lunch.

This was the only bit of civilisation that I passed. I saw a few little towns in the distance . This village had one of those ‘rocket ship ‘ style church bell towers common in the Veneto region.

There were lots of people cycling and walking along the path through what was a long nature reserve following the river. There were ecological messages along the way – 4,000 years for a discarded glass bottle to break down! 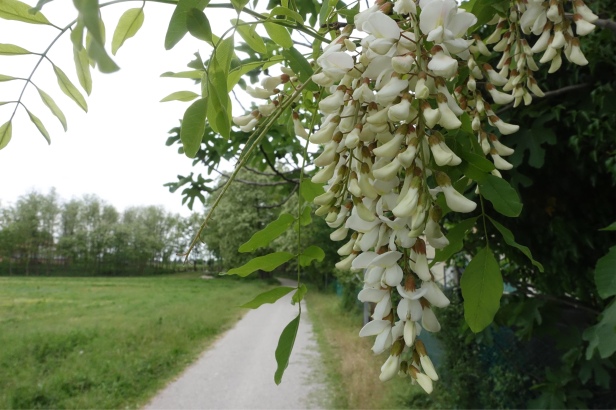 As I got close to Piazzola the route veered away from the river and into farming areas.

I finally arrived in Piazzola after around 8 hours walking. This place is famous for being the birthplace of the painter Mantegna and also for the large villa built here around 1540. Villa Contarini was designed by Palladio.

The Contarini family were an old and obviously very wealthy Venetian family and like all such families they liked having a country house as well as a palazzo in Venice .

These families became very wealthy as Venice had a virtual monopoly over trade with the East until the Portuguese found a sea route to India .

Tomorrow I’ve got an easy flat 26km walk to the city of Padova where I’m going to have my first rest day.