My day didn’t start out well. I read through the guide each morning and try to remember the salient details but in the end I rely heavily on my GPS.

Not long after leaving Bagnoregio I thought I was following the right path from what I remembered of the instructions and it lined up with the GPS.

But before long the road became an overgrown track again.

I could hear traffic quite close so I scrambled up the muddy bank to the road. The problem was that the rough track and the road I was supposed to follow were so close I couldn’t tell which was the right track. I reached for my trusty title Garmin GPS and it was gone! My little travel companion without which I would have been lost so many times . I could have cried but I scrambled back down and began what was probably a hopeless search in the thick undergrowth.

After a half an hour I thought I’d very carefully check the slope up to the road as this is most likely where it fell from my pocket. This wa a bit painful as there were lots of scrapey, stingy, scratchy leaves and vines but …

As I write this 12 hours later my arms and legs are still itchy but the scratches have all stopped bleeding !

After that it was plain sailing for 35kms! In this photo you can see the hill town of Montefiascone . 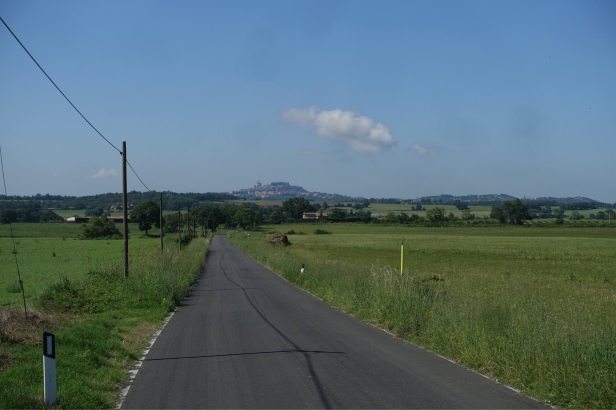 Off in the distance I saw what seemed to be someone riding a horse towards me but their progress was very erratic with a lot of prodding going on.

It turned out to be someone riding a donkey with a little white dog running along side . I had a bit of a chat and he was a shepherd who used guard donkeys like the one I had met earlier in my walk ( see Salurn/Salorno – Trento April 27   )

There were quite a few quarries – tuff must still be used in construction. 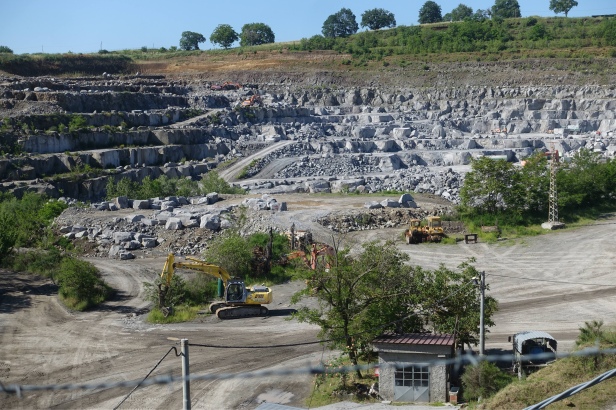 I reached Montefiascone at lunch time. This is the point where the Via Germanica that I’ve been following for the last 5 weeks and the Via Francigena from France and countries in the north west come together.

Right at that point is the church of San Flaviano, built in the year 1100.

It’s unusual in that it has two levels . My friend Franco tells me that this was to accommodate Catholic and Orthodox worshippers given that the Via Germanica bought pilgrims from eastern parts. 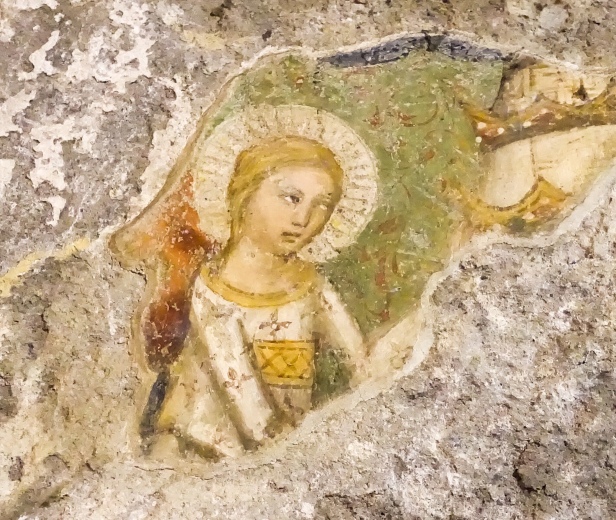 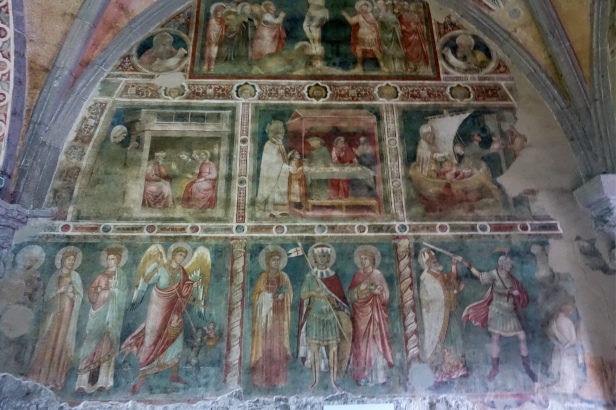 From Montefiascone there is a wonderful view of Lake Bolsena.

I was very hungry at lunchtime so instead of my usual panino lunch, I treated myself to a mixed grill.

This is a statue dedicated to the Via Francigena. 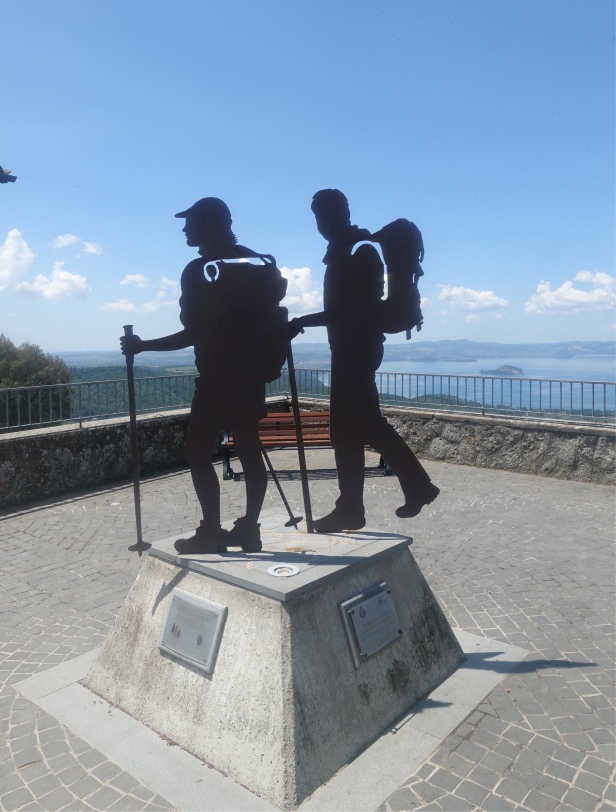 I’m now on the Francigena signage is very prominent and it will be hard even for me to get lost .

Looking back at Montefiascone

Not long after leaving Montefiascone there is a largely intact tract of the Roman Via Cassia – the principal trunk route between Rome and Florence.

Built around 150AD, it remained an important road for over 1,000 years.

This is probably one of the few original bits of Roman road with street lights used by daily traffic. 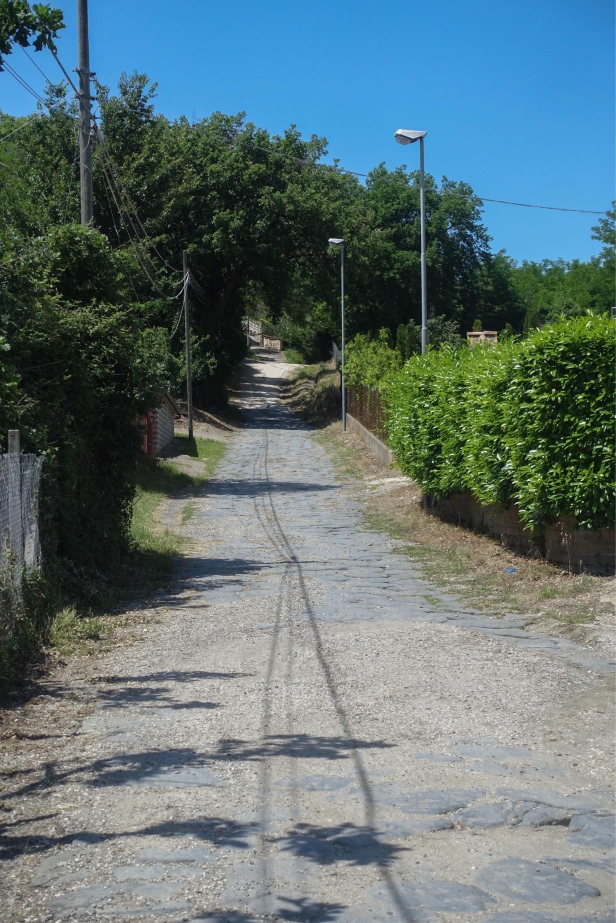 Lots of flowers were growing along the railway track. 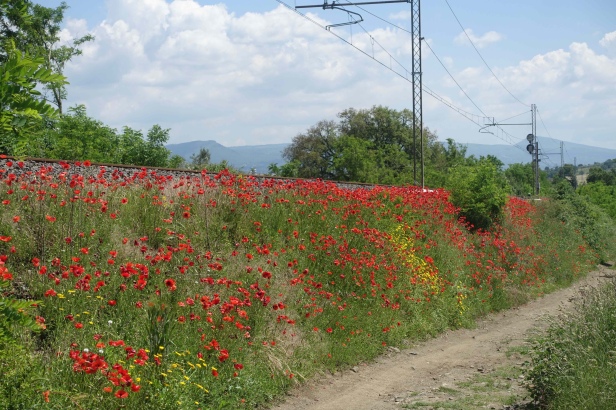 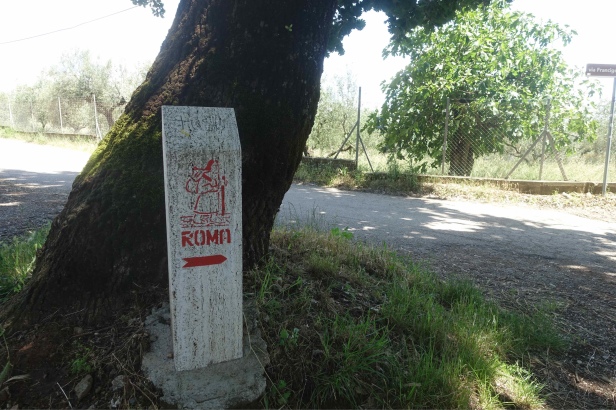 I passed a hot spring area in the middle of nowhere . Nearby I saw some people digging up rocks from beside the road. I stopped to ask a woman about what she was doing.

She explained that the volcanic rocks were for her garden and then we had the usual conversation about my walk. 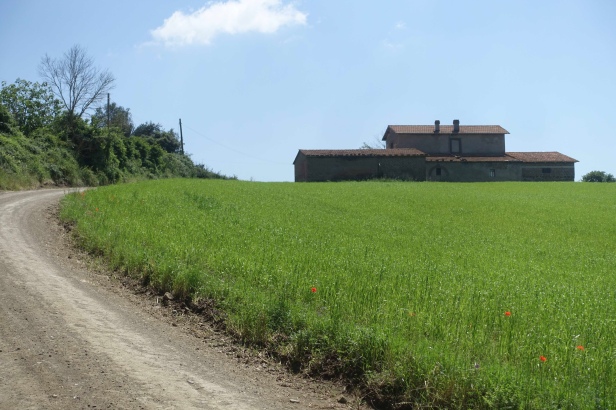 I reached the outskirts of Viterbo later in the afternoon given the long walk today. The traffic was crazy with lots of complicated roundabouts and dangerous for pedestrians .

At one stage I was stuck half way across a pedestrian crossing with cars wizzing last on both sides. Perhaps they thought I was some kind of experimental traffic calming device, doomed to failure.

The old town is very attractive however . 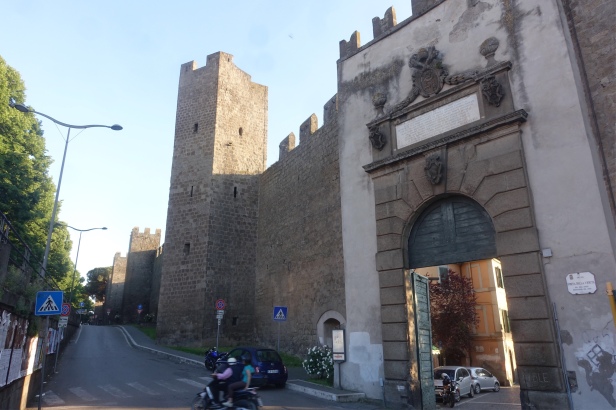 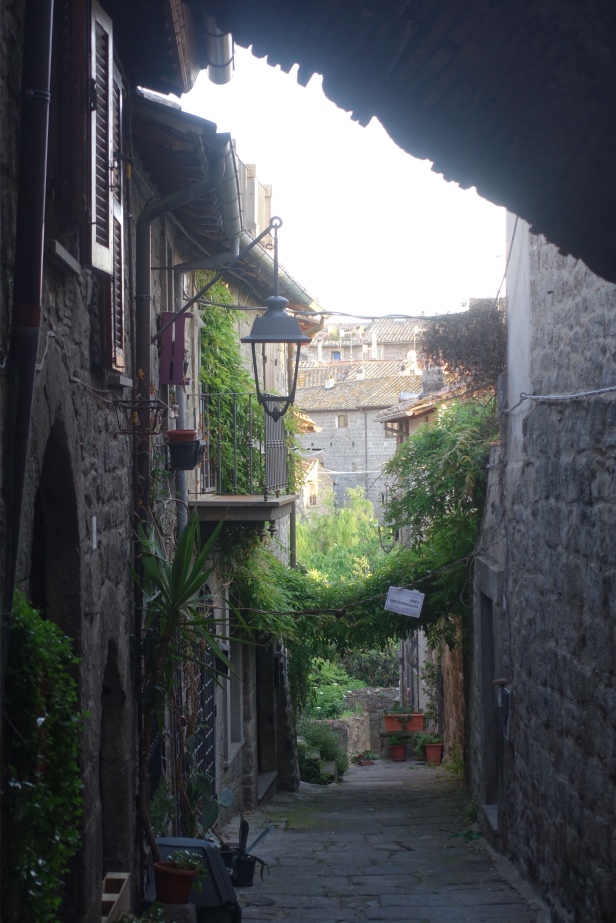 Tomorrow I’m taking the same shortcut I took 3 years ago when I walked the Via Francigena. It does though require a very long climb – the last big climb before I get to Rome.

7 thoughts on “Bagnoregio- Viterbo May 25”